My name is William Reimer, I’m a 22 year old writer from Adelaide.

Bullying is an issue that affects all children on some level – and if not addressed early on, it can have severe psychological consequences.

Statistics indicate that it’s only getting worse. We can blame it on whatever we like – playing with guns on video games, violent movies, troubles at home – whatever the case, if a child so much as wears a different type of hat to school it can really have an adverse affect.

I remember waking up early one morning in Year 2 to mix up a concoction of oats, vinegar and milk to pretend I was sick. Of course I thought this was an absolutely brilliant fool-proof way to convince my parents I was too unwell to attend class but of course they knew!

This bully in question was in fact picking on me because I was named “William”. Who knows why. In fact – He was also called “William” but as a regular 7 year old I couldn’t see the utter silliness of the situation. All these insecurities he was projecting onto me – It’s so difficult to teach the concept of perspective.

I personally believe the best way to eradicate bullying is to build unshakable self-confidence. This is of course much easier said than done – and there are many ways to try to achieve this – but it’s absolutely vital. It’s about being able to step up and say “Hey! I know who I am, I know what my strengths are and you’re not going to bring me down”. These are the traits I wanted the protagonist of my children’s book to have.

A few years back in Year 11 I was given an assignment to write a short story. Being your average student, I left it to the last minute and wrote the story the night before it was due.

So I wrote it in an evening – it flowed really quickly. The title just popped into my head! Mem Fox had already taken every other animal under the sun – and “Phil” made a lot of sense to me. Much better than “Barry”.

The next day I took it to English and the class seemed to like it, my teacher Mrs Eton had a favourable opinion too.  I thought that I might be onto something really special, but when you’re in Year 11 you’re not exactly encouraged to strike out on your own and self-publish a book! Into the drawer it went.

A few years later I was working around some hospitality jobs which started to really get me down. Around the same time I rediscovered the first draft of this story, so I began to chat with mums that I knew, and reached out on Facebook groups to share the concept of my story to see if there was any interest. I was receiving some really heartbreaking personal stories from parents and teachers – and so much encouragement to finish my book – I felt compelled to finish it and give self-publishing a shot.

What did I have to lose? I was 21 years old – I’d just pick myself up, dust myself off and look for another job if worst came to worst. Plus I was far too impatient to wait months (if not years) to hear back from a traditional publisher! So I rewrote the story about 16 times, went from bank to bank and was rejected about 6 times, but eventually caught a break.

My story is about a small ferret who overcomes a big bully without resorting to violence. It’s a simple story, with a lot of heart. I worked closely with a local artist James Moore to try to capture the gorgeous illustrations of the old classical children’s books as I felt these were the ones that had real staying power. James and I actually met in kindergarten!

In the opening pages of my book I begin with an affirmation  – “May this lighthearted book spark the much-needed conversation about bullying. May it encourage discussion of the many different ways to address it, and may it empower those who face it.” I hope that A Ferret Named Phil will make it easier to bring up the anti-bullying discussions early on in childhood – I want every child to feel empowered and inspired when they read Phil’s story and hopefully it can set off a little spark inside of them that makes them walk a little taller and not let anything stand in their way when there’s something they want to achieve in life

The amazing feedback and testimonials I have received from Mums and teachers across the country has been heartwarming too – the fact that it’s already being used in schools as an anti-bullying resource reaffirms to me that I made the right decision to quit my job a year ago to pursue this book.

Find out more about William’s story by visiting www.aferretnamedphil.com.au! 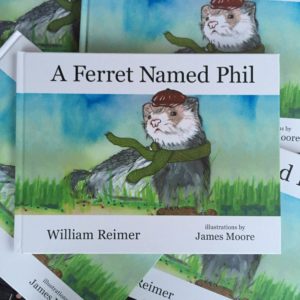