Sound buttons are visual cues to help children break up a word into graphemes. Whilst the term ‘sound buttons’ is relatively new, the concept of using visuals to help children segment and blend words has been around for many, many years! You may know it as synthetic phonics. Either way, the use of sound buttons is a proven method for teaching children in the early years how to decode words.

We have discussed the use of sound buttons before in our blog – What Teachers Should Know About the Science of Reading. In this blog, we were joined by Clare Wood, a Literacy specialist from Tiny Steps Make Big Strides. She spoke about the importance of reconsidering the use of blends and, instead, focus on blending and segmenting words to help children decode unfamiliar words. Using sound buttons is one way that can help children grasp this concept.

Decodable Sound Buttons for the Classroom

When creating this resource, we wanted to make sure there was a systemic and explicit progression from simple CVC words using the letters – s,a,t,p,i,n to words that contained digraphs and even split digraphs. It’s true that many schools will have a slightly different scope and sequence in terms of the order in which to introduce single letters and sounds. However, we decided to go with a single letter progression that was suggested by Clare. Therefore, the words that are seen in the first group of cards only contain s,a,t,p,i.n.  These are the most common 6 letters that are taught at the beginning of the explicit instruction of sounds in the early years’ classroom.

Does your school teach a slightly different progression? That’s ok – we have created these cards in an editable Microsoft Word template as well. The dots and dashes have been itemised as images. So, you can copy and paste under the words you wish to use on the cards so that it links with your school’s scope and sequence.

This first group of flashcards contains words that are made up of the letters s,a,t,p,i,n – these are most often the first six letters that are introduced to children in the early years classroom first.

They are all decodable singular letter graphemes as well. 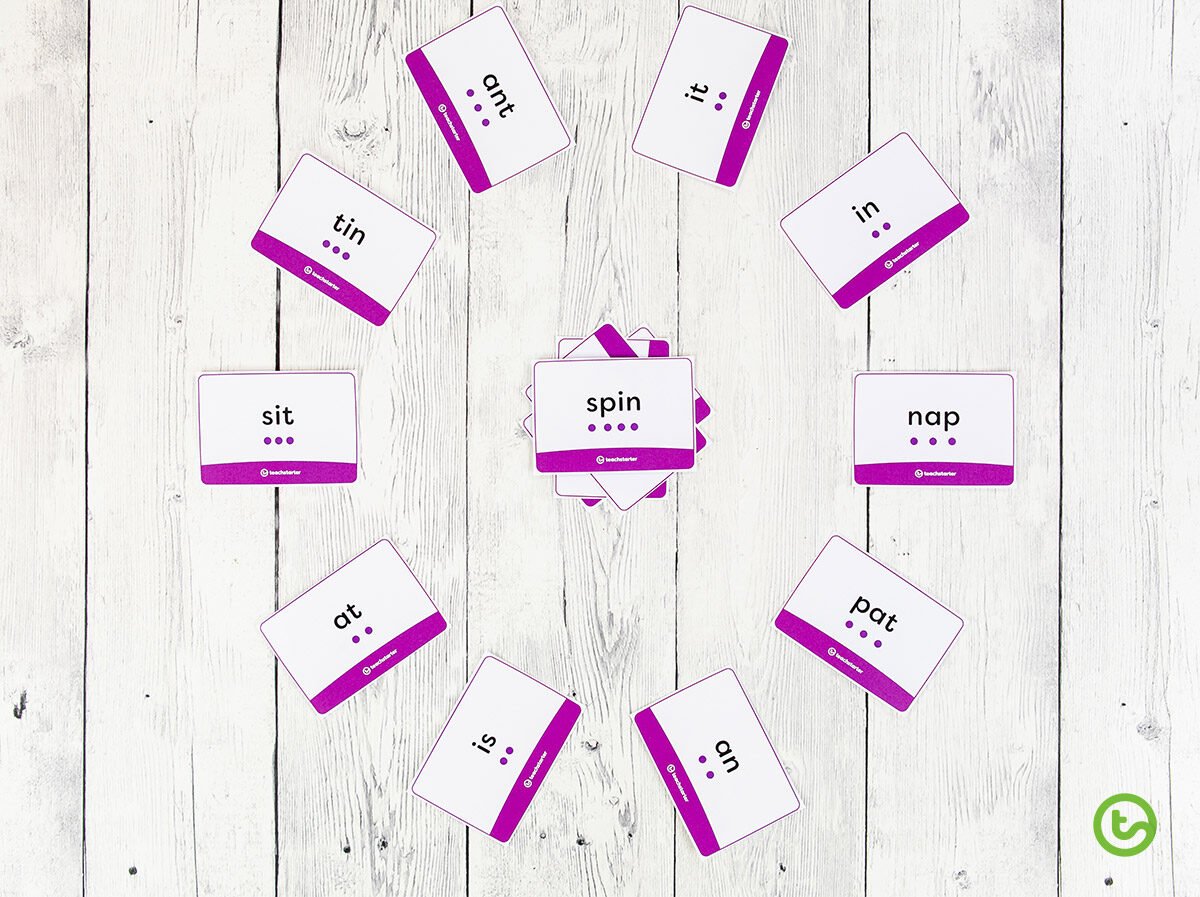 In the next group of flashcards, we have incorporated the letters above with the letters – m,d,g,o,c,k.  Again, mostly cvc words that are made up of singular letter graphemes. 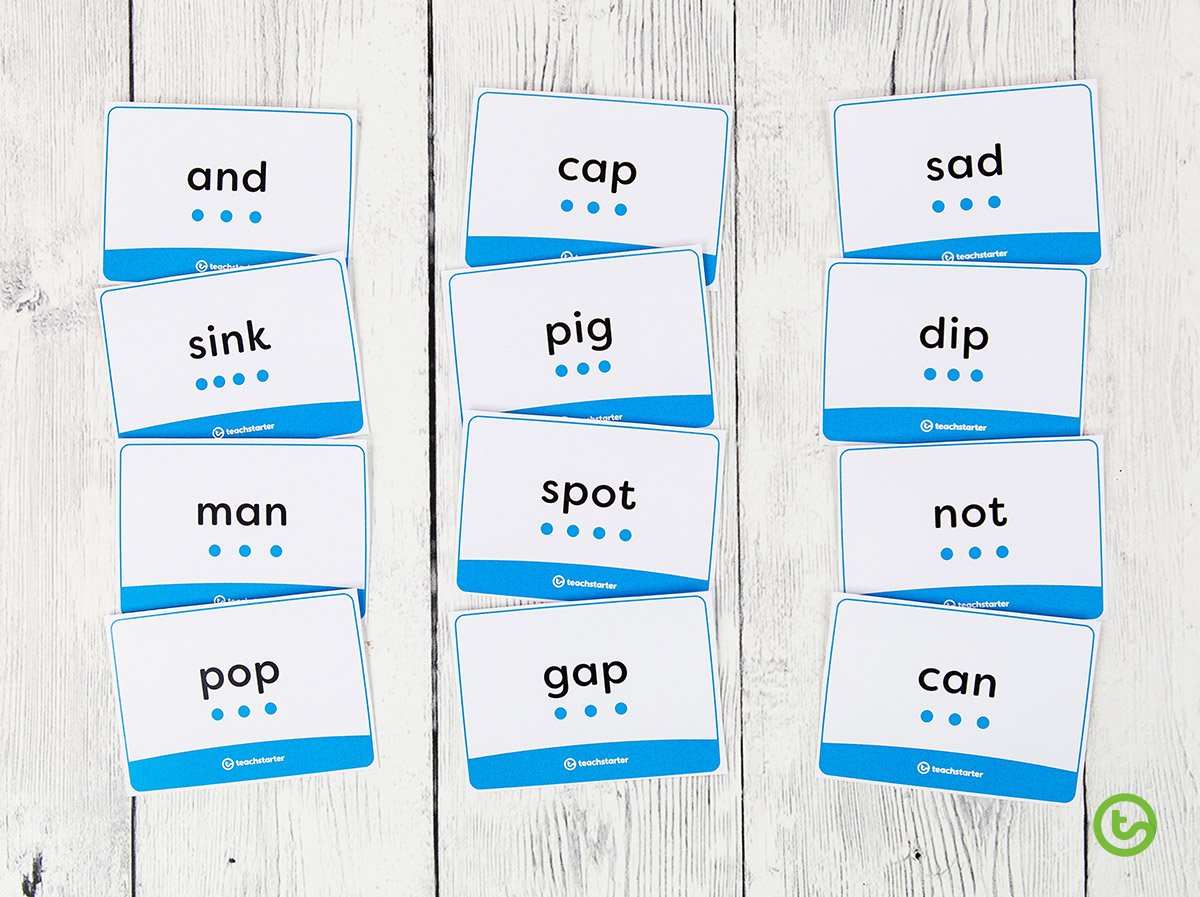 This next group of flashcards includes the above letters from the first two lists with the letters – e,r,u,b,h,f,l. You’ll notice that these words are also more often a CCVC or CVCC word. So, often a four-letter word with four graphemes.

Next, we have included the following letters into the mix – j,w,v,x,y,z,q. 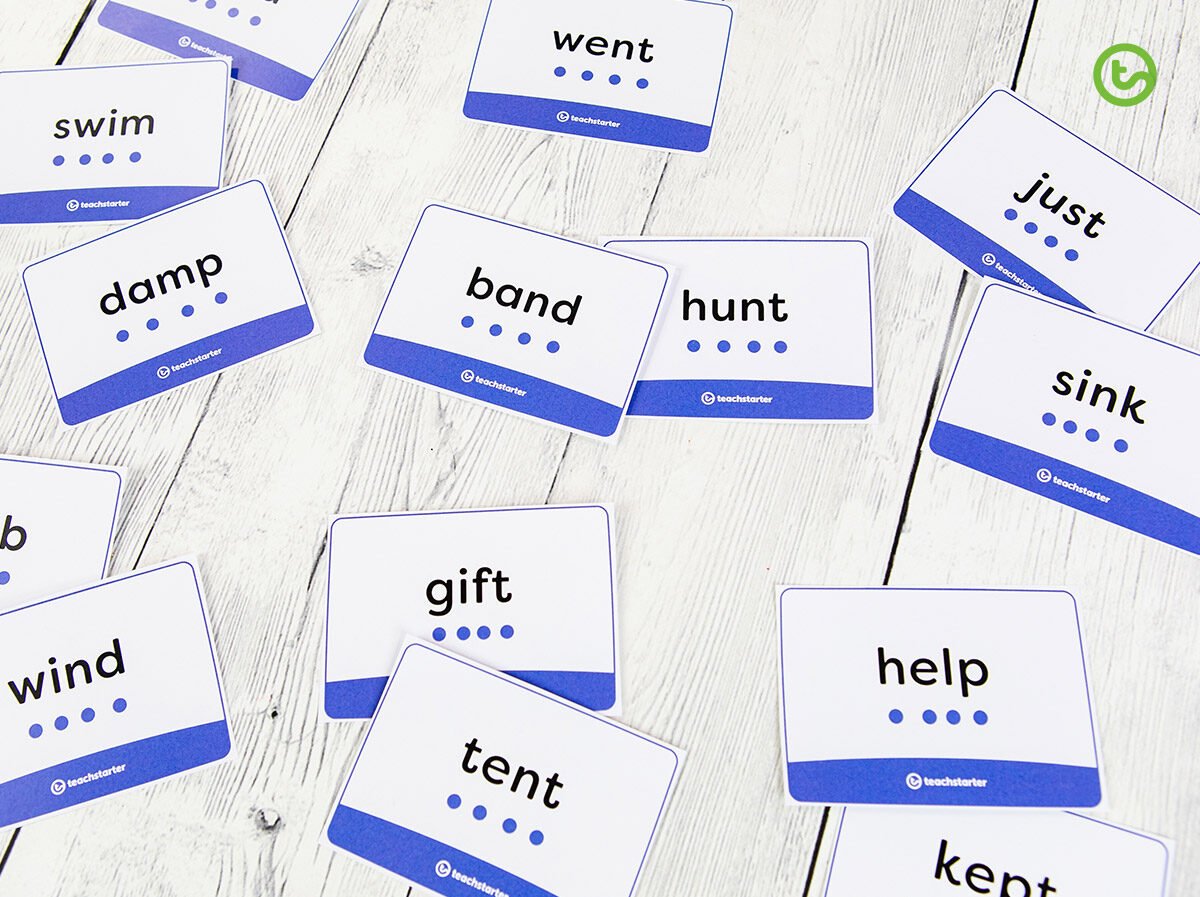 The red flashcards now include singular graphemes with the digraph – sh. 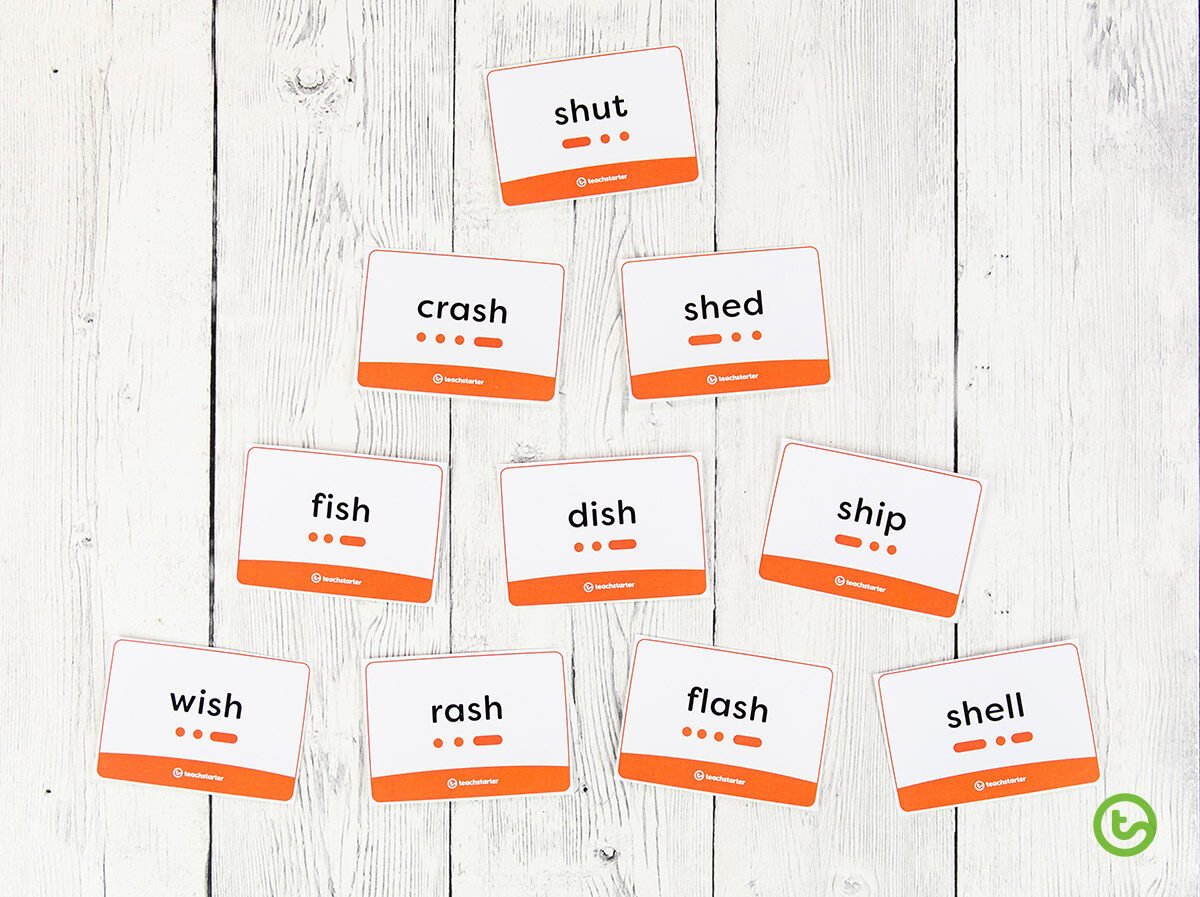 The yellow flashcards focus on the ‘ch’ digraph grapheme. 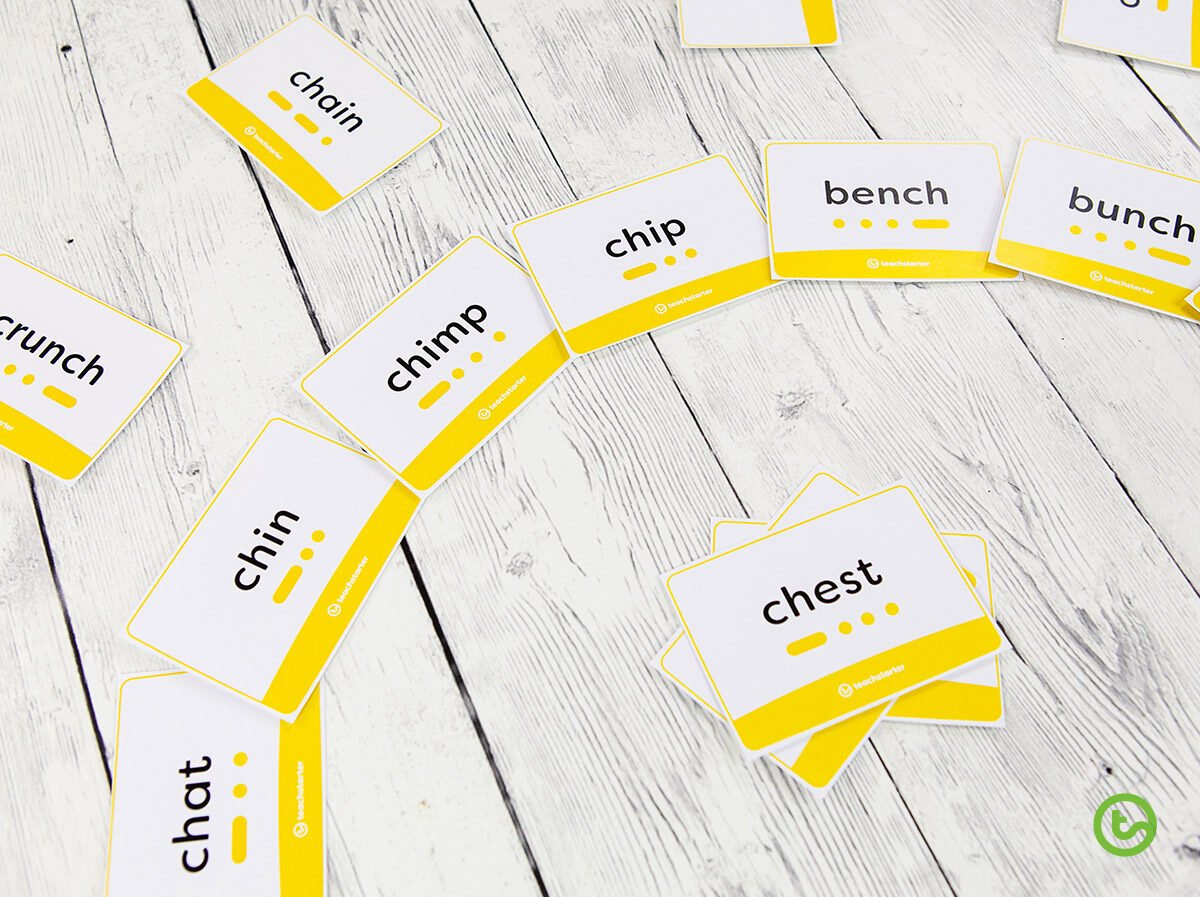 The green flashcards focus on the ‘wh’ digraph. Finally, our last list of flashcards in this release incorporates the ‘th’ digraph. 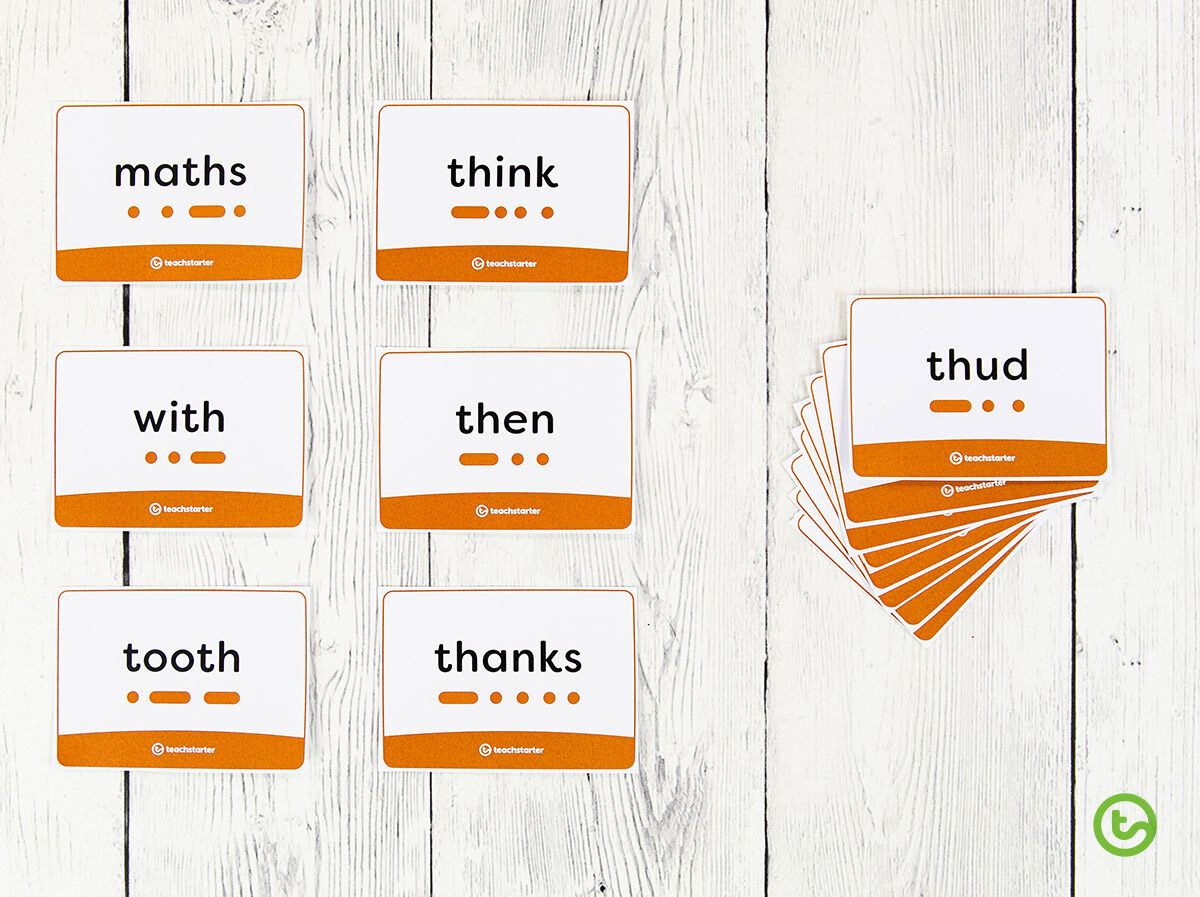 The colour coding on the flashcards has been done to make things easier for you! The classroom teacher can easily provide students with cards that are appropriate for their level of knowledge. It’s also a great way to differentiate in the classroom. 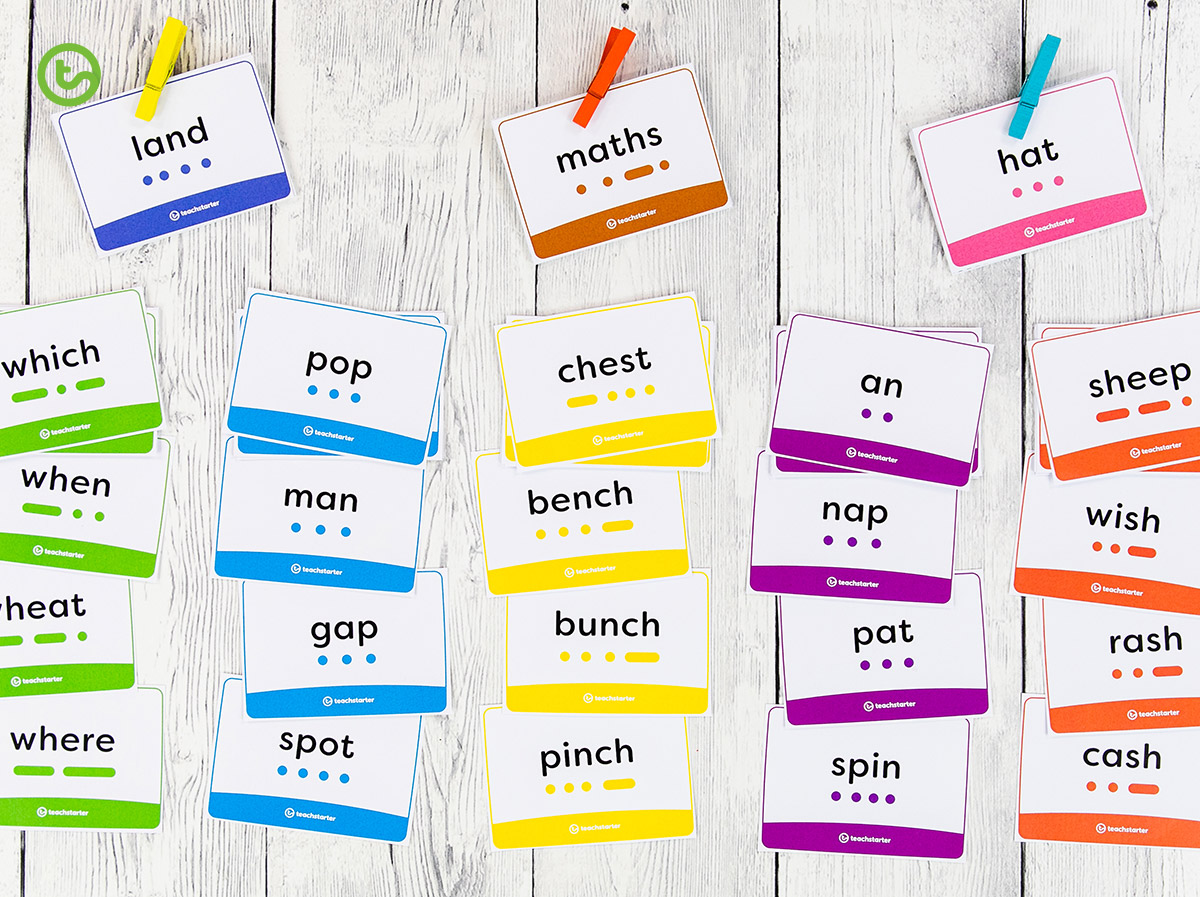 How do you help your students with segmenting and blending?
Let us know in the comments of this blog.