Depending on where you’re teaching, your students may have a mandated physical education class … then again, maybe not. According to the National Association for Sport and Physical Education, only 22 states require schools to allot a specific amount of time for exercise activities. This leaves a lot of kids with classroom exercises as their only outlet!

Why Is Exercise Important in the Classroom?

Whether your students are heading out of the classroom for much-needed fitness activities or it’s all on you as a teacher to make sure your students get some movement during the day, we probably don’t need to tell you that there are benefits to classroom exercise. Students who exercise tend to concentrate better, fidget less, and are more engaged and motivated learners — hey, don’t take our word for it … the CDC agrees!

So how do you add some quick fun exercise activities into your school day? Are there exercises to do in the classroom that don’t take up too much time or require a lot of space?
We’ve got you covered!

How Do You Include Physical Activity in the Classroom?

You’ve got a lot to teach in 180 days, and we know adding fitness activities to the list can sound like a LOT.

But working exercise into your day is a lot easier than you’d think — fitness makes for a great brain break activity and can be done in relatively short periods of time while still being effective at helping your students recharge and refocus. In fact, studies show that interspersing your lessons with physical activity will actually help your students better absorb the information. And brain breaks only need to last for 5 to 15 minutes.

Here are some quick — and more importantly fun — classroom exercises for students that work for kids from kindergarten through middle school!

All Hands on Deck

Designate a section of the classroom as the play space, with one boundary of the playspace as the “ship” and the other boundary designated as the “shore.” Set students up in the middle of play space — this is the “deck.”

Call out sea-based orders to let students know where to go:

No need to have balls flying around your classroom for this soccer game! The ball is pretend!

It’s silly, but you’d be surprised how much fitness is involved in navigating an imaginary ball around your classroom!

Why not add a sweet (get it?) game of Fruit Salad as part of your lesson plan and get some quick fitness in while you’re at it?

The Fruit Salad Game is like musical chairs with a zesty twist. It can be played as a whole class or in large groups and is great for lower grades. You can print the Fruit Salad instructions or project them on your whiteboard or smartboard for students to check back on the rules! This classroom fitness activity is best in bigger classrooms. Use a long jump rope for this game. Two students hold the rope and rock it side to side, without it being turned. A student enters the rope and jumps the rope at least twice before exiting. Each time a skipper enters, the rope is raised a little more until a student misses.

In this classroom exercise, one student is chosen to be the octopus and stands in the middle of the playing area (tip: use the random name picker to choose who gets to be the octopus first). All the other students are lined up along one boundary. When the octopus calls out “Octopus,” all the students run to the opposite boundary, trying to avoid the outstretched arms of the octopus.

If a student is tagged by the octopus, they become seaweed and sit on the ground with their arms out. The seaweed helps the octopus by tagging other students as they run past. The last student remaining at the end of the game wins and becomes the next octopus.

The Chicken Evolution Game is a fun, active game that can be used at the beginning of any lesson or partway through a task to avoid losing your students’ attention. This whole class game is suitable for upper grades and is sure to get a few giggles as students evolve from a chicken into a supreme being! Print the chicken evolution instructions for easy game play! 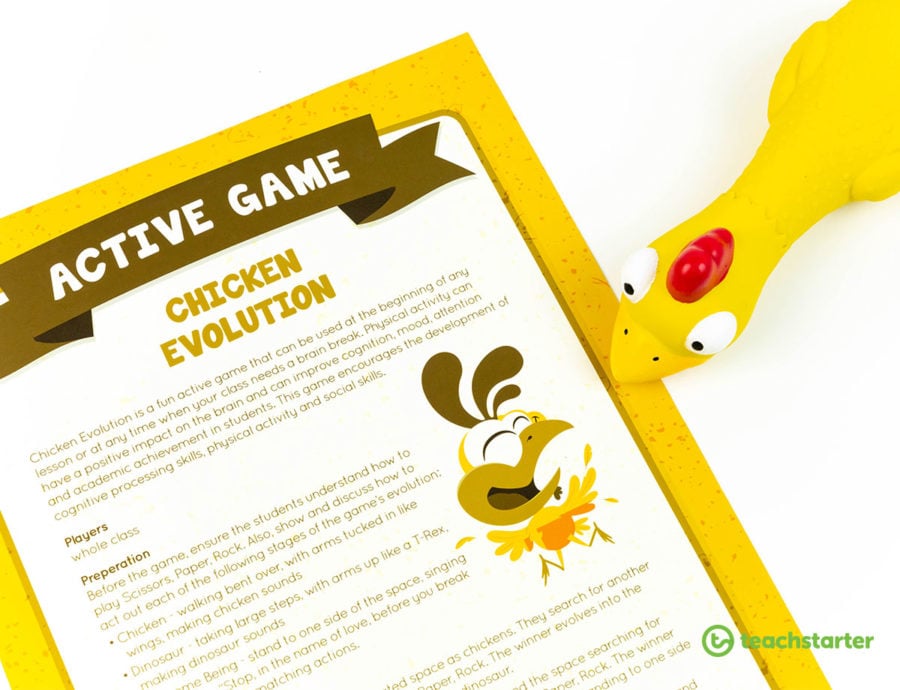 In this fitness activity for the classroom, students stand in the middle of the playing area waiting for the teacher to call out one of four directions:

Use a large circular parachute to play a range of games, such as parachute tag, popcorn, and rollerball.

Divide the class into two equal teams. Each team has a goalie. Markers indicate the goals on each side of the ‘field’. On their hands and feet with their tummies facing up, students move around like a crab, kicking a large softball to play a game of “soccer.”

The team that scores the first goal wins.

OK, technically this fitness activity takes the students out of the classroom, but you could vary it using window markers on the tile floor to keep them inside.

Use chalk to draw sets of hopscotch grids on the playground. Instead of numbers, write weekly spelling words in the girds.

Students use a pebble from the playground to throw onto a grid. Students spell the word as they jump through the hopscotch grid! We also suggest a sight word version of this fitness game for younger students! 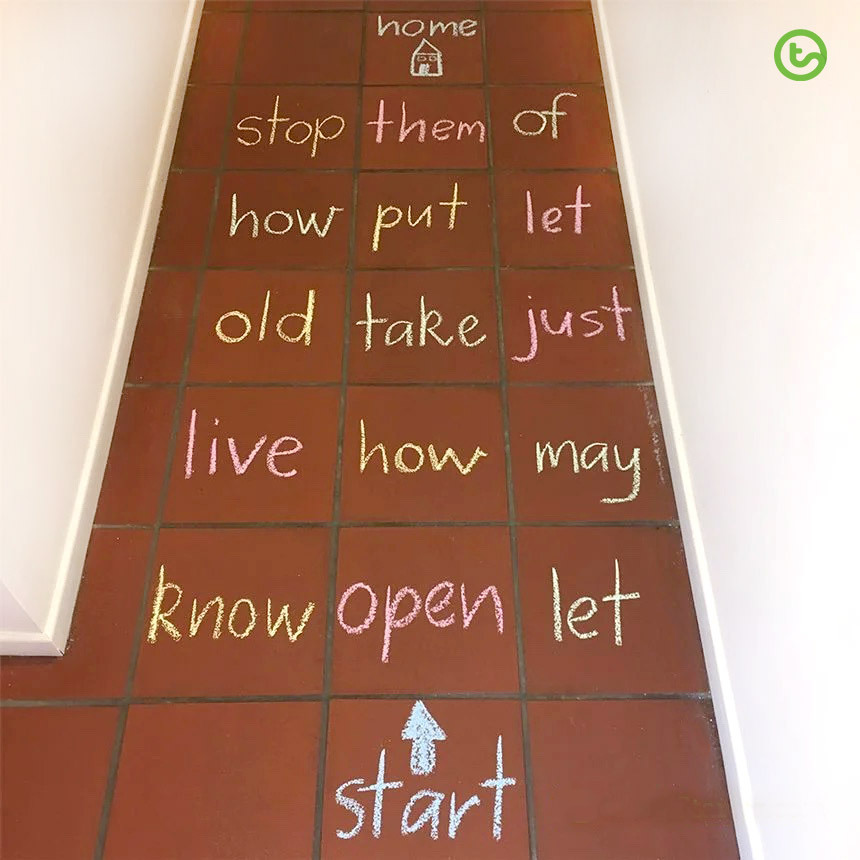 Who said a fun classroom exercise couldn’t also be a learning experience? This is a great fitness activity that incorporates clock skills.

In this exercise activity, students make a large circle and hold hands. Allocate two students to play the roles of “cat” and “mouse.”

Shazzam! is a twist on the old favorite Rock, Paper, Scissors. In Shazzam!, the objects are replaced with the characters Wizard, Giant, and Knight. The game’s twist comes when teams have to agree on a single character! The first team to win 10 rounds is the Shazzam! Champion! Print the Shazzam instructions for each of your students! 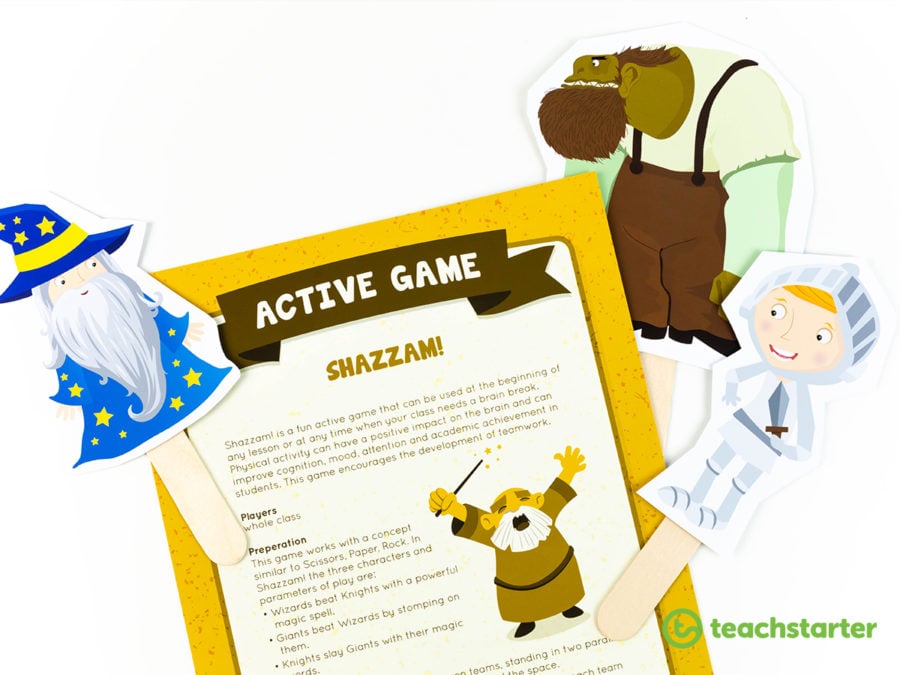 Want to get started right away? We have already put together printable brain break cards with dozens of activities to get you going to increase physical activity in your classroom. You can also try yoga in the classroom for some fitness that’s a little more low-key.