Ah, subtraction strategies. Whether you’re new to teaching subtraction or looking for some new methods to add to your teacher toolbox, teaching young mathematicians different strategies to help them tackle a problem will not only boost their confidence in their mathematic skills now but also serve them as they grow and move on to more complicated maths.

Why Do Kids Need Subtraction Strategies?

Research has long shown that young kids find subtraction harder than addition and some experts have called for less emphasis on subtraction fluency in the primary years to focus more on building a more solid understanding of addition first. Researchers have also proven that students have substantially more success with subtraction when they can use their addition skills. Likewise, learners who understand the inverse relationship between addition and subtraction demonstrate better conceptual knowledge and — you guessed it — fare better with subtraction.

That’s where subtraction strategies play an important role in teaching this particular arithmetic operation. Rather than having to remember all their subtraction facts, students employ reasoning and their understanding of number relationships to come up with answers to the problems before them.

We know everyone learns differently, and students need to learn a variety of strategies as they develop their math fluency, so we’ve pulled together a host of options to help your students be more successful at subtraction.

Remember what we said about kids who understand the inverse relationship between addition and subtraction? The Make Ten subtraction strategy makes use of that relationship by reminding students that any subtraction problem can be reformed as a missing addend problem.

Many teachers teach students to break apart the larger number in a subtraction problem to “make 10.”

Tip: Using ten frames and counters will help students to understand this strategy at first before they can move on to breaking down the math mentally.

If the numbers are near one another, students can simply “count up” from the number being subtracted (subtrahend) to the whole (minuend). This works best with numbers that are within 10 digits such as 456 and 459 or 21 and 27. Using word problems can help cement this particular subtraction skill.

Another subtraction strategy that makes use of addition, using doubles plays off student memorization of doubles facts. For example, when a student remembers that 8 + 8 = 16, this can be used in reverse to deduce that 16 – 8 = 8.

(4) Use a Hundreds Chart 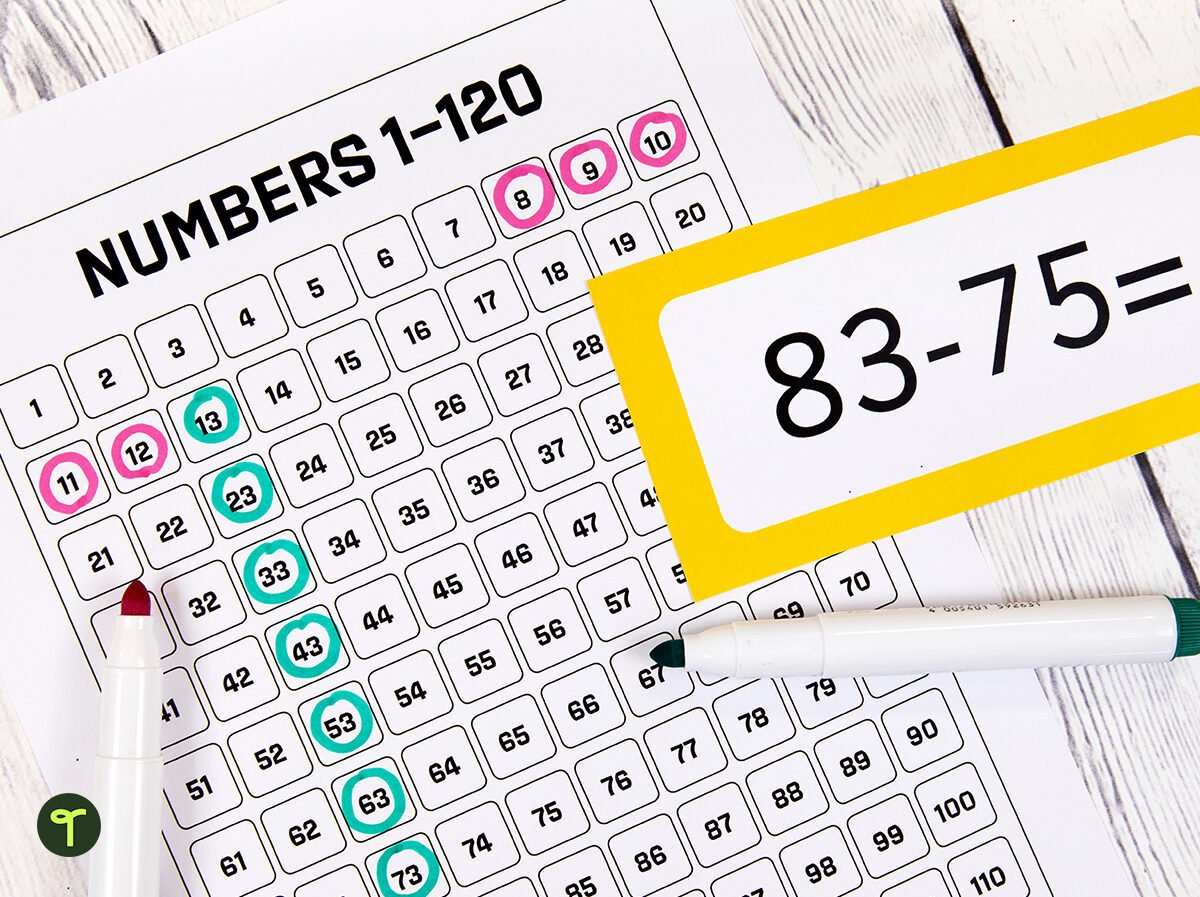 Another popular mental math strategy for solving subtraction problems is known as the split strategy because — you guessed it — it involved splitting one of the numbers in the problem! In this case, students will split the second, smaller number (the subtrahend) into expanded form. This strategy will work with various subtraction problems — even those that need regrouping (more on that later).

So how does it work? Let’s say you have the subtraction problem 164-48.

The student will break the 48 down into its place value values or expanded form — 40 and 8.

This subtraction strategy is also often called the “break apart” strategy as you’re breaking apart your subtrahend into the tens and ones.

Some students are visual learners, and using a number line is a subtraction strategy that plays to that strength! Sometimes called the “jump strategy,” this method allows students to subtract smaller numbers very easily. Students find the minuend on their number line and move toward the left according to the number given as the subtrahend, counting as they “jump” the space between them.

As students develop in their skills, they can progress from counting the difference out by 1s to counting by 5s or 10s.

Tip: Provide each student with a number line that they can keep close by, along with a dry-erase sleeve to make the number line easily re-usable. Students can use a whiteboard marker to “jump” along the line to solve a variety of subtraction problems.

Get more subtraction strategy tools to teach this building block of maths in your classroom, curated by the Teach Starter team of expert teachers.