Are you an upper elementary or middle school teacher looking out for some new drama teaching ideas? These theater games are perfect for engaging students in grades four and up, and they incorporate important educational elements from ELA class, health class, and more, so they’ll end up supplementing their entire education!

Bonus: They make great brain breaks for the traditional classroom too.

Oh, and did we mention that we’ve managed to make them fun? The teachers on the resource creation team at Teach Starter know kids … and we know teachers! We’ve dreamed up drama games that are as enjoyable to teach as they are to play.

What Are Drama Games?

Allow us a quick detour, will you? The name can be deceiving — we’re here to arm teachers with tools they need to teach everything from math to science to ELA and beyond. And while that includes acting, drama games are certainly not reserved for drama teachers. They have their place in the traditional public (or private) school classroom too.

Drama games are essentially activities that are built in the theater, but when you step beyond the acting space, these games can help students develop a myriad of skills that come in handy as they learn their ABCs and 123s. Here’s just a taste of what scientists say the students in your classroom will get out of a few drama games sprinkled into the week:

When you look at it that way, the concept of this approach to drama for kids is quite simple: Take one familiar game or activity, the topic from a unit kids are currently studying, and turn it into a drama lesson! With that in mind, here are eight drama activities for kids from our Teach Starter teacher team that you can add to your repertoire straight away.

In this activity, your students will continue to build confidence in using their body (movement) to create a role and communicate meaning.

Encourage students to move slowly, with the aim being that anyone watching the pair wouldn’t be able to tell who is leading the movement and who is following.

Add complexity to this activity by layering in one or more elements of context. This turns “Mirror, Mirror” into a tool for exploring the content from another key subject area in a completely different way – a fantastic way to cater for kinesthetic, social, verbal, and auditory learners.

You can add just one of these contextual elements, or multiples – each will support students in the creation of different moments of dramatic meaning.

Working collaboratively is a foundational skill for life and drama students too. This fun game helps students to build awareness and understanding of group work and is a great way to introduce the concept of ‘ensemble’ (a group that works together to create). 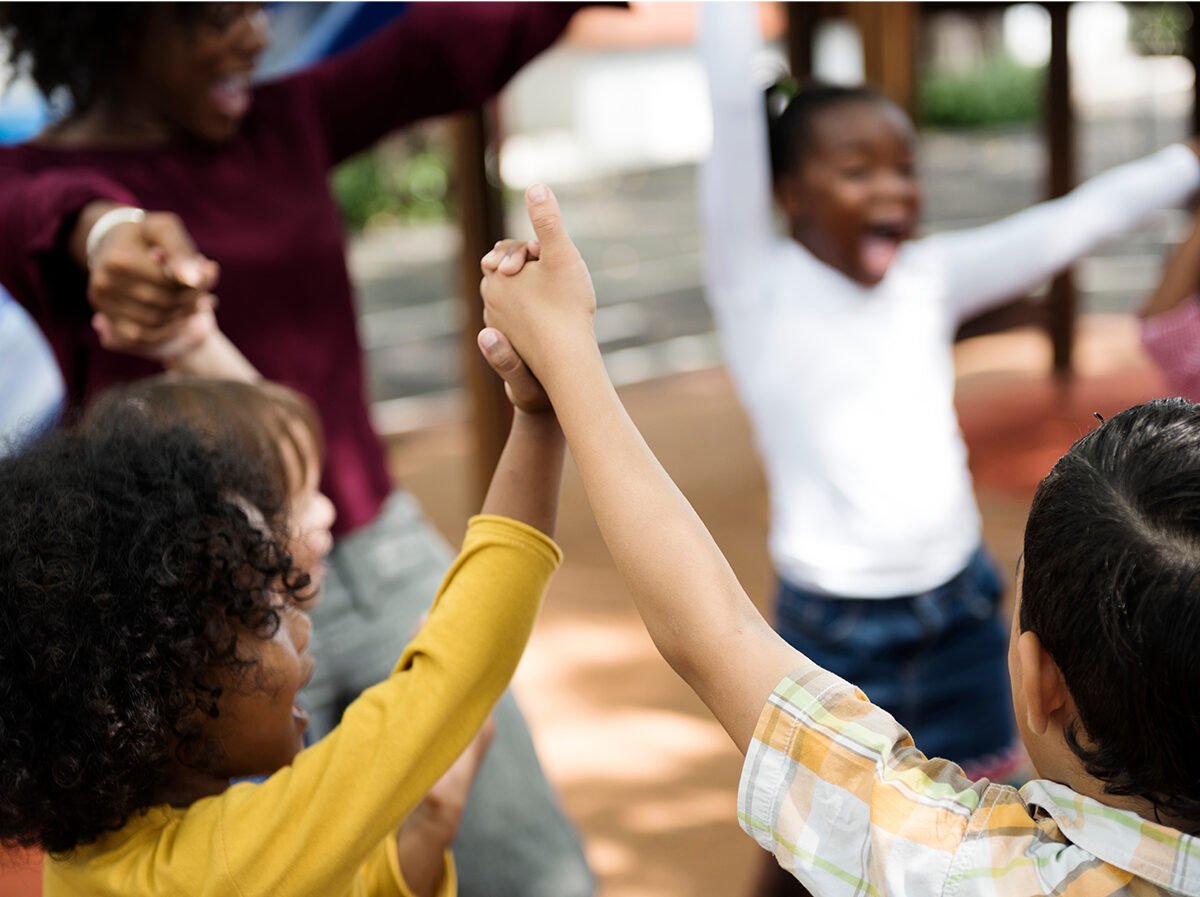 Encourage students to work slowly and carefully, with an awareness of how their movements affect others in the knot. Some knots are easy to untie, and others take a lot of communication and negotiation!

Increase the complexity of this ensemble-building game by asking students to complete it in silence, by making the number of students in each group larger, or by trying to untie a whole class knot!

An absolute favorite of mine, this is a drama game for kids that works with a concept similar to “Rock, Paper, Scissors.” It is fantastic for exploring role, voice, movement, tension, and focus. In “Shazam!” the three characters and parameters of play are:

Students enact each character in the following way:

Play “Shazam!” as a whole group game, following these directions:

Play round after round, keeping the pace up and keeping a tally of each team’s number of winning rounds. The first team to ten are the winners!

Print a Shazam activity for each student.

To adapt this game take elements, concepts, characters, or ideas from any topic and create three “characters” and parameters that suit.

Specifying characters from a familiar narrative explored in ELA class will encourage students to use voice and movement to create a role.  It will also explore the relationship between the characters. The game itself requires both group and individual focus, and creates amazing tension!

If in science class students are learning about renewable energy, students could be the sun (standing like a star jump and saying “Ahhhh!”, a solar panel (standing stiff like a board and “buzzing”), and electricity (arms outstretched towards opponents and saying “zap!”). In this version,

Speaking of zaps, “Zip, Zap, Zoom” is another great collaborative game that teaches focus. Students “pass the energy” around a circle, using action and a variety of vocal commands. In the traditional game, students stand in a circle and send the energy around the circle saying either Zip, Zap, or Zoom.

Every command is done with an action, the easiest being to clap and point to the person the energy is being sent to.

“Twenty-one” is one of those drama games that get even the most fidgety of students concentrating with laser focus.

Sitting in a circle, students attempt to count to 21 in a random order, without two or more people speaking at the same time. One person begins by saying “one”, then another person says “two.”

Continue the group count until you reach twenty-one. If more than one person says a number at the same time, the count begins again.

This game can be used with any familiar content that has a sequence. For example:

Also known as “10 Second Object”, this activity gets students to use their bodies to create freeze frames (like a real-life frozen image) that depict an object or a situation. Use this activity to talk about how we can communicate meaning through movement.

You can decide on a “scoring” method that feels right for you (such as giving scores out of ten or choosing one winner per round), or you may prefer not to “score” at all, and just use the activity as a confidence and group awareness building exercise.

“Body Sculpture Olympics” can be adapted as a drama activity linked to most any content at all. Simply create a list of characters, situations, or objects that are related to a familiar topic. Or better yet, let the students create the lists.

This activity means students use movement and space to establish a dramatic meaning (they communicate situation, role, and relationships through their frozen image).

This activity is great for older students, using both their prior knowledge of a topic and their imagination. It requires students to use role, relationship, situation, voice, and movement to create dramatic meaning.

What makes this game extra fun, is that there is only one rule – the expert can never stop talking, even if they run out of facts well before their time is up. Students should just keep talking, making up anything at all about the topic, no matter how absurd or far-fetched.

Not all drama is based on fiction! This activity is a great way to explore how drama-makers (playwrights, actors, dramaturgs, directors, set, and costume designers) can play with the ideas related to a “real” topic in order to create an artistic, symbolic, absurd, or stylistic representation of it through Drama.

Create a whole-class story in this imaginative drama activity that is for practicing individual and group focus.

When using this as a general drama activity, you could use one of the Teach Starter widgets as a prompt for the story. The Vocabulary Word of the Day spinner has dozens of word lists you could draw from, the Visual Writing Prompts Widget provides perfect One Word Story stimulus, and the Random Sentence Starter spinner is a really fun way to kick-start your students’ imagination!

Connect this drama activity to content from a unit, text, or topic your students are currently studying. Establish with the class a few broad “key features” the whole class story needs to have. For example, if students are exploring food and nutrition in a health unit, you could agree on the following aspects of the story:

It is important not to get too detailed when establishing the key features of the story (i.e. you might not articulate a specific problem or conflict that has to happen), as you want your students to be able to shape and guide the story in an imaginative way.

This activity can be played without context for a fun, classroom brain break that explores many of the elements of drama including situation, role, relationship, voice, tension, and mood (as the students will likely create a narrative that touches on each of these). Or you can use it as an imaginative way to reinforce key concepts from, and students’ understanding of, any topic you have been exploring with your class.

Use visual prompts such as cards from a relevant word wall, a projected avatar of the specific characters, or create some custom labels with the character names, words, and places that work with your current units. 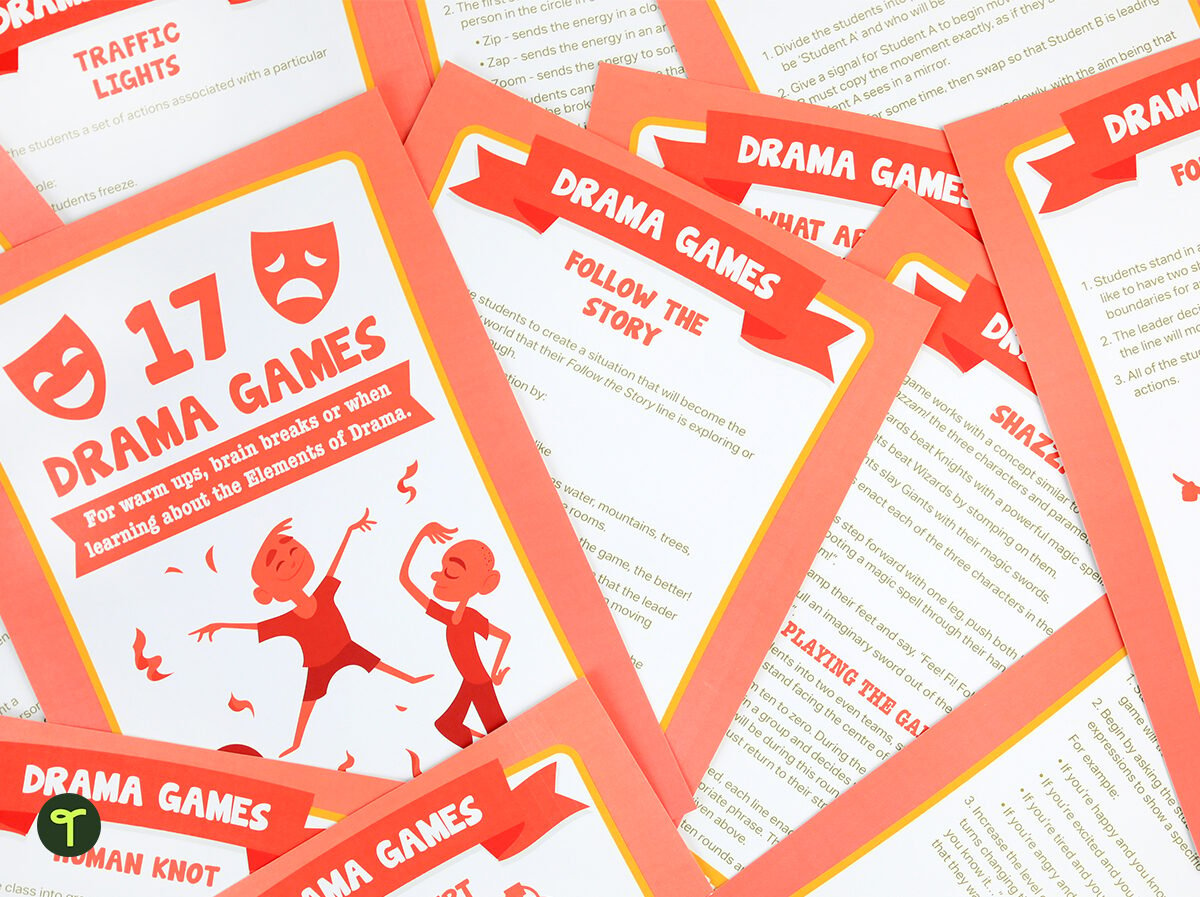 For more help injecting drama games into the classroom, try these 17 Drama Games for Kids activity cards or check out our expert-teacher curated collection of brain breaks!