This activity is best used in a math center or guided small group to practice comparing numbers. 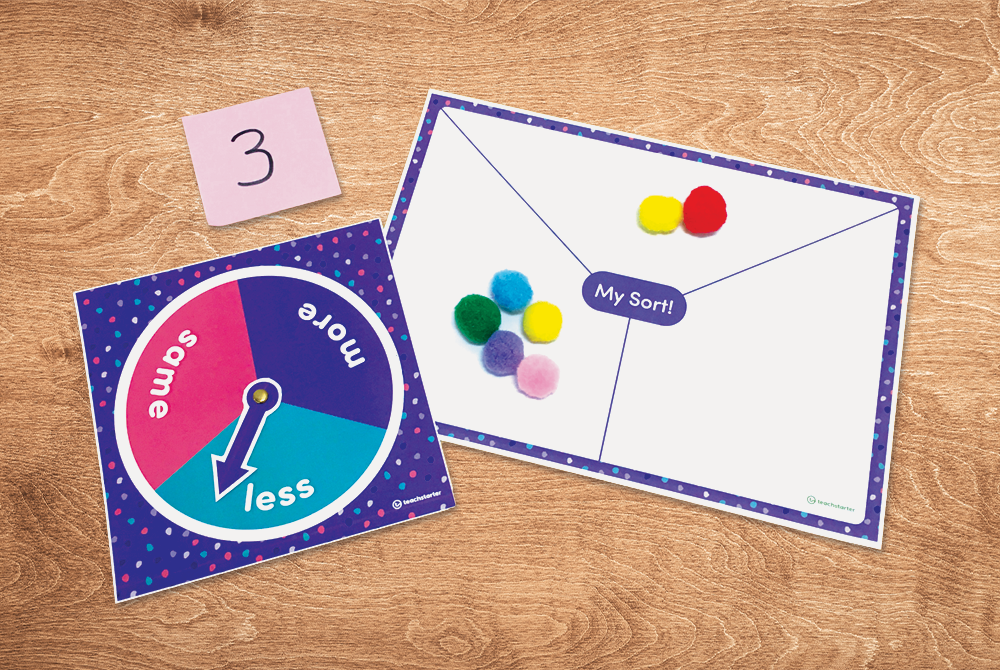 Print the sorting mat and spinner on cardstock for added durability. Cut out the arrow and attach it to the spinner. Alternatively, use a large paper clip for the spinner. Students place the paper clip in the center of the spinner and secure it with the eraser side of their pencil. Then, they thump the paper clip, allowing it to spin around the spinner until it lands on one of the sides.

Students randomly choose a number as their “focus number.” Alternatively, provide students with a deck of number cards to draw from each time. Students will spin the spinner. If the spinner lands on “more,” they will generate a number of items that is greater than their focus number and place the pile in the “more” section of the sorting mat. Students continue to spin and generate numbers, placing the piles in the appropriate sections of the mat.

Other Ways to Use This Resource

This resource could be used in a number of different ways.

Students spread out an assortment of number cards in front of them. After selecting one of the number cards as their “focus number,” they spin the spinner. The spinner directs where they will place a counter – either on a number card that is more, less, or the same.

Hopping on a Number Line

Looking for other resources related to comparing numbers? Click on the links below.

Which Is More? Card Game

A set of cards for students to practice comparing and ordering numbers up to 20.

Practice comparing 2-digit numbers with this set of 20 task cards.

Build number sense skills with this set of 24 task cards.

Write a review to help other teachers and parents like yourself. If you'd like to request a change to this resource, or report an error, select the corresponding tab above.

Would you like something changed or customised on this resource? While our team makes every effort to complete change suggestions, we can't guarantee that every change will be completed.

Login to suggest a change

Did you spot an error on this resource? Please let us know and we will fix it shortly.

Login to report an error